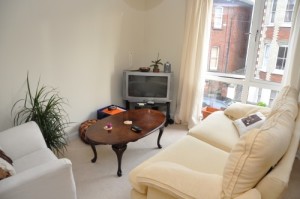 I remember when I moved in the new flat I had just bought. It was a brand new flat in the center of town, with 3 bedrooms, a beige carpet and white walls. It smelled like fresh paint and it was mine. Waw.

All of the flat was of course empty. No furniture, no art on the walls, just the fitted kitchen and the washing machine. I wish all moves were like this, offering you a new start, but usually, once the furniture removals company has dropped all your belongings, your house is already full of things. In this case, I was coming from a furnished rental so aside from clothing, I had very little.

I went online and looked for used beds, drawers, wardrobes, and a couple of weeks later, the flat was fully furnished.

That was back in 2009. Since then, I have rented those 3 bedrooms to three students, who come and go during the academic year. I went back to the flat a couple of month ago. The two storage rooms were full, the kitchen was full, the bathroom was full and each bedroom was full of stuff.

As a matter of fact, you could barely find place for new stuff. I know three roommates would need three tubes of toothpaste and three bottle of shampoo, three bottles of ketchup in the fridge and pretty much three of everything. They do share what I bought, like cutlery, plates and pots for cooking, or the TV in the living room.

But it was quite amazing to think that only three years back, this flat was as minimalist as can be, with only basic furniture and they filled it with clutter so fast.

I have almost reduced all clutter in my life, since I have been traveling on a motorbike, and all my things had to fit in a topcase, I trimmed the fat big time. But I know it is like a diet, if you take off the pressure, you start by eating a bit more, then some more, and before you know it you are back to being overweight. I hope this won’t happen with clutter once I settle down again.

Planning for a secure financial future is a wise decision that you should make for your family. You need to be committed to building wealth and take charge of your money. By investing in the right ... END_OF_DOCUMENT_TOKEN_TO_BE_REPLACED

Cryptocurrency has become a popular investment option in recent years, as more people want to make profits from its white-hot rise. However, cryptocurrency investment is a risky endeavor. It is highly ... END_OF_DOCUMENT_TOKEN_TO_BE_REPLACED

Unsurprisingly, there are plenty of people out there jostling to help you spend your nest egg. All promise high returns, but not all that many deliver; in fact, you can quickly lose your super if ... END_OF_DOCUMENT_TOKEN_TO_BE_REPLACED

If you have recently taken up a position at a brand-new company and opened a 401k for the first time, you may be on the hunt for additional information when it comes to the various ways in which tax ... END_OF_DOCUMENT_TOKEN_TO_BE_REPLACED

Congratulations! You’ve worked hard this year. You made it through some tough days (or weeks or months). And now, if you’re lucky, you might end up with a holiday bonus. But before pocketing that ... END_OF_DOCUMENT_TOKEN_TO_BE_REPLACED

The United States of America is a destination most working professionals and travellers have on their list. Being one of the most visited countries in the world, it houses many tourist attractions, ... END_OF_DOCUMENT_TOKEN_TO_BE_REPLACED