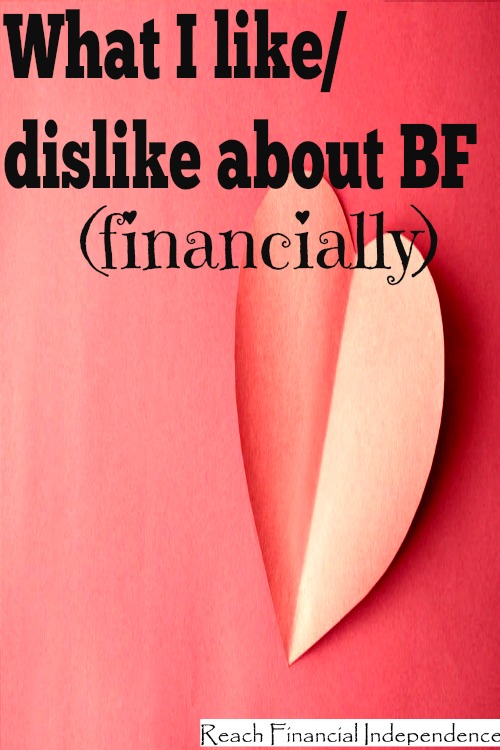 BF and I have been together about two years now. It is a strange relationship since we barely met before we decided to leave everything and travel the world. We have been to about 15 countries, and are living 24/7 together since we travel by day, and share a hotel room or camp at night.

So obviously we had to merge finances almost immediately, at least as far as traveling is concerned.

Here is what I like and dislike about his/our finances

To avoid having to fill big spreadsheets of who owes what, with different currencies and the like, he deposits me once in a while, I contribute the same amount, then pay for everything using the “community” money, and warn him when I need more cash. Every month or so I give him an update of where we stand. This is really simple and easy and he had no problems trusting me with his money (and we were riding his motorcycle back then, so where would I go anyway, walking with my stuff out of the topcase?)

Update: we now operate as a LLC

He is a good businessman

BF has a huge collection of art and coins, as well as a cattle ranch, and when I hear him talking about business, I learn a lot. He has a gift for buying low and selling high that I quite haven’t mastered… yet!

Update: I invested in cattle too!

He loves to bargain

While I’m all about saving money, I don’t like to spend hours bargaining and he would do that so well anyway, getting a much better price than I would.

Update: He got us a really sweet deal on some Guatemalan land.

Being quite older, BF has a much bigger estate than mine. He is now debt free and before that had always gone into debt to buy appreciating assets, like a house.

While we are each paying for our expenses, he is often buying me little things, like a t-shirt or some earrings. I don’t think he ever gave me something worth more than $30, but when he sees that I like something and hesitate to buy, he always buys it for me as a gift. He is the same with people he loves, knowing the fine line between spoiling people and helping them get things they really want.

Update: I now donate 10% of my online income to charity as well.

BF buys stuff just like that. He is kind of a recovering shopaholic who went to shopping sprees before and could come back with 4 suitcases of clothes he’d barely wear.

Last week, he bought 4 cans of “caviar” to a weird Russian guy selling them in the streets of Tallin, Estonia. Obviously they were fake, containing not even fish eggs, but some kind of disgusting fish paté, and we throw them away. He would buy t-shirts of places we go to, then realize we travel by bike and space is scarce, then throw good shirts away.

Update: life in Guatemala has been pretty expensive so far!

BF grew up with a private jet and a private yacht. So when we are traveling, even though he agrees to camp once in a while, we mostly stay at hotels and eat in restaurants.

We are going 50/50 on the travel expenses. So when we could camp, and the weather is ok to camp, and we are in a nice place to camp, but he suddenly decides that he wants a hotel room, I have no choice but to oblige, yet I feel that it is my money going down the drain too. Then I remember that I’m only paying for half the room, and on my own that would be more expensive.

Update: We bought a car and a boat in Guatemala!

Having had always more than enough, he can’t really relate to frugality or simply trying to save money. Eating bad food in expensive restaurants on a daily basis is not something I enjoy. I’d rather have a picnic and every two or three days eat in a restaurant. He would agree in principle. Then tell me on the second day “we haven’t eaten well in days”, and take me to a bad, expensive restaurant.

And when I try to explain that it goes beyond money, he just shrugs and calls me cheap.

* we are traveling in Northern Europe at the moment, and that region doesn’t shine for its gastronomy. Lots of processed foods, fried this and that, and restaurants are really overpriced for what you get. To the tune of $12 for a boiled egg and two slices of ham, exuberantly called “breakfast”

He is wasteful sometimes

While I’ve tried to explain to him that there is no point in running the water when you brush your teeth, or the AC all night when it’s not so warm, even if it’s included in the hotel rate, many habits I can’t change.

Update: I am on a zero food waste challenge now that we have a home.

I think we make a pretty good team, because I can be too frugal for my own good sometimes, like when we get to a super expensive city, and I don’t feel like doing the super expensive attractions, and he reminds me that only once will I be around and able to enjoy them.

Unsurprisingly, there are plenty of people out there jostling to help you spend your nest egg. All promise high returns, but not all that many deliver; in fact, you can quickly lose your super if ... END_OF_DOCUMENT_TOKEN_TO_BE_REPLACED

If you have recently taken up a position at a brand-new company and opened a 401k for the first time, you may be on the hunt for additional information when it comes to the various ways in which tax ... END_OF_DOCUMENT_TOKEN_TO_BE_REPLACED

Congratulations! You’ve worked hard this year. You made it through some tough days (or weeks or months). And now, if you’re lucky, you might end up with a holiday bonus. But before pocketing that ... END_OF_DOCUMENT_TOKEN_TO_BE_REPLACED

The United States of America is a destination most working professionals and travellers have on their list. Being one of the most visited countries in the world, it houses many tourist attractions, ... END_OF_DOCUMENT_TOKEN_TO_BE_REPLACED

When you were a kid, did you ever save quarters in a jar? Or set aside a portion of your allowance in a piggy bank for a big purchase, like a bicycle, a pair of designer shoes, or anything that mom ... END_OF_DOCUMENT_TOKEN_TO_BE_REPLACED

No matter where you are in your career, the potential of eventually retiring can be a daunting experience to think about. Are you saving enough for the future? If you are, when will you have enough ... END_OF_DOCUMENT_TOKEN_TO_BE_REPLACED