If you want to see where we started from day 1, I made a nice little page with all the links to previous posts about the house and Guatemala in general, like the cost of living, travel tips, etc. Check out my Guatemala page.

Hi there! It is good to be back home, after barely spending a week here in the past 6 weeks, we have been back for two weeks now. In our absence, the works have progressed nicely, both on the new room and some land development projects.

The room is supposed to look like the drawing below, a main room with a big French door, a bed, storage all around and stone walls, and an attached bathroom with a walk-in closet. 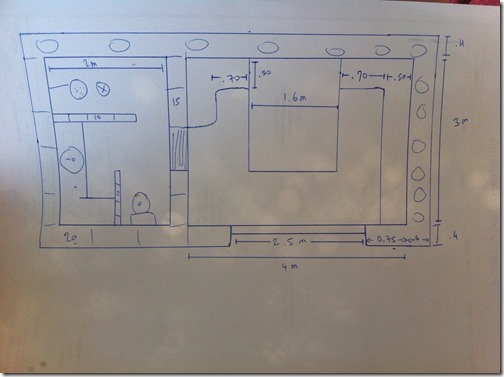 It is taking shape, slowly but surely. This is the front, which the room made of stone and the bathroom of block because in the old new room, the stone bathroom is really humid, so clothes are mouldy and towels take forever to dry. 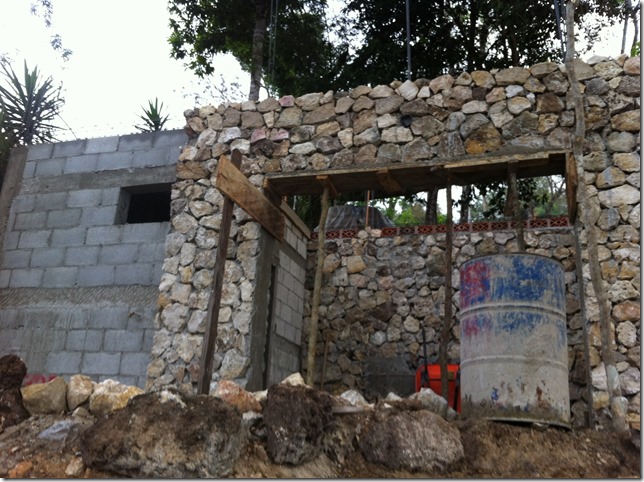 From the side, you can see the “windows” which are just bricks with holes to let the air in. They will be sealed with mosquito nets, but no glass. 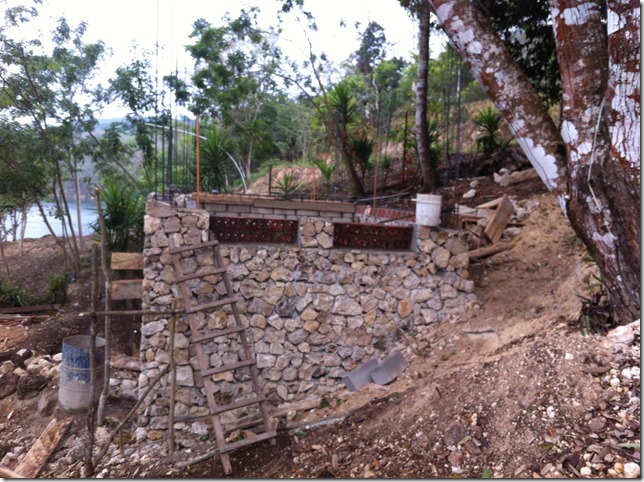 The electric wiring had to go between the room ceiling and the terrace, the guys had given me a quote including electric work but as I requested three ways and other complicated things, BF had to do most of the work. The contractor enjoyed the time off to go make money at other people’s, which pissed us off pretty bad. He was straightened up and did some extra hours the next few days. 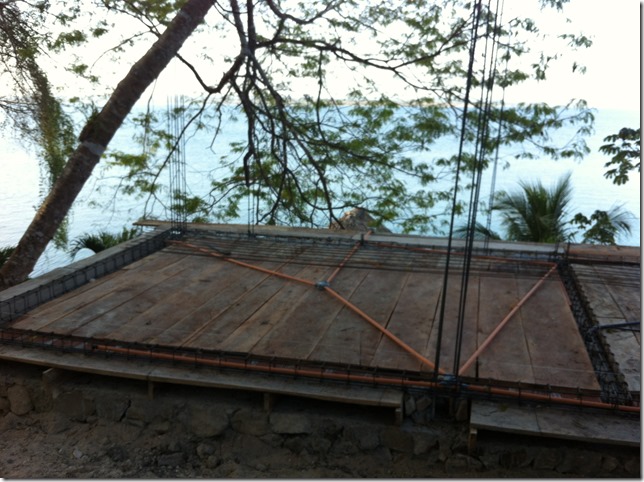 That is the grid that will sustain the concrete terrace 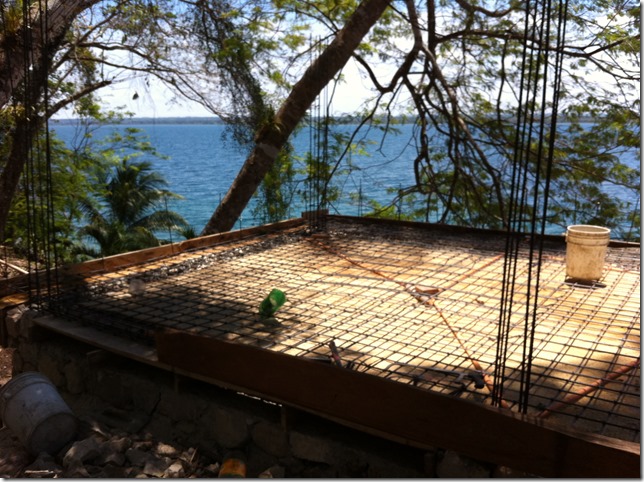 and once they poured cement over it, we had a roof! 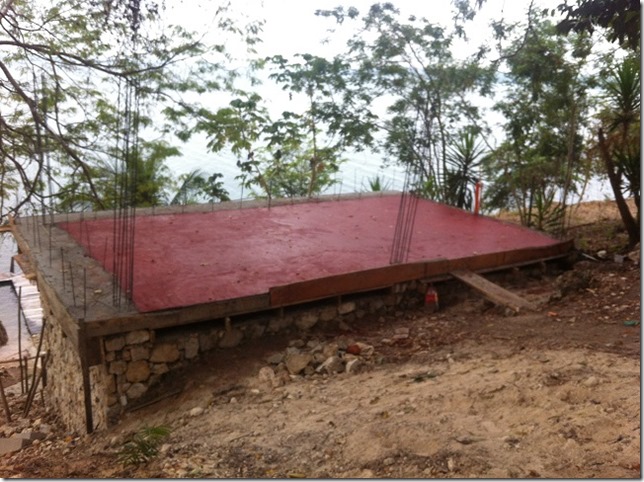 We hesitated between leaving it like that or doing something on top, then decided it was a free floor anyway, so it will have flower beds, a bar, some hammocks and a roof to relax over the lake.

While we were away, my handyman was on carpenter duty, and had a whole list of doors and cupboards to make for the new room. I had bought some wooden planks so he just had to cut and assemble. Turns out after over two weeks away, he had barely done anything. I was furious, but chose not to say a thing because he was the only one able to do the job, and I have him on payroll anyway, so considered the salary while I was away was to keep the garden clean and everything running for some Airbnb guests.

However, a week later, we went away again for two weeks and when we came back, he was still the same unmotivated, bordeline lazy guy we had left. Since he and his girlfriend shared a full time job with us, they used to come in only four hours together, he would fix stuff and she would clean, so they had all afternoons free to do what they pleased. But with the new attitude, we asked the GF to work more hours, and him to come in the afternoon so we always have someone around to carry heavy things or wait for guests to arrive at night. They countered saying they wanted a raise (!) or work 6 hours a day instead of 8 for the same salary. Sadly for them, we are in a buyer’s market, as the vast majority of 3,000 inhabitants are dying to get a job in the village. I showed the girl that they already get paid 50% more than what the building workers make for a very heavy work, carrying 50lb bags of concrete up and down the land 8 hours a day when they just have to keep the garden clean. They also get paid 14 months a year plus two weeks holiday, while the guys get paid weekly and that’s it.

That was not enough for our guy, who decided to quit, but thankfully the cleaner stays in the morning and to attend guests, as she cooks well and speaks English. We replaced the gardener a couple of days later when a young guy magically appeared asking for the job. He said our neighbor sent him, which wasn’t true, but he probably heard me talking to the neighbor asking for recommendations as his brother gardens next door. There definitely are ears everywhere! But with a lot of alcohol problems in the village, and our house having so much temptations, from beers to luxury items they can’t afford, better have someone half recommended than a complete stranger.

On the land development, there was a major piece of news. When we bought the land, it had a small lake access which was public to everyone, but kind of attached to it, so the cattle could go drink water on the shore. A couple of weeks after the sale, we discovered that our dear friends from the council had sold that public property to the highest bidder, and we had no lake access anymore. Our plan was to keep it public, but make a nice deck and marina for our buyers. We were left with only two options right in front of our land to buy, so we could have our private beach. The third plot is the weather institute’s which has a station and allows you to swim there for free, so worst case scenario we would have talked to them to build a nice deck there. But we weren’t happy so we approached the other two owners. One was not selling and the second one gave us a crazy price, way above market.

Well, after months of thinking, and trying to lower the price, we finally throw the old lady an indecent amount of money, but became the proud owners of 100 meters of beach right in front of the development! We may have paid the highest price ever around the whole lake, but have already done a price hike on the plots to reflect the added value, and plan on building 5-6 houses there, for people who want a small place right on the water. Get in touch if you do! 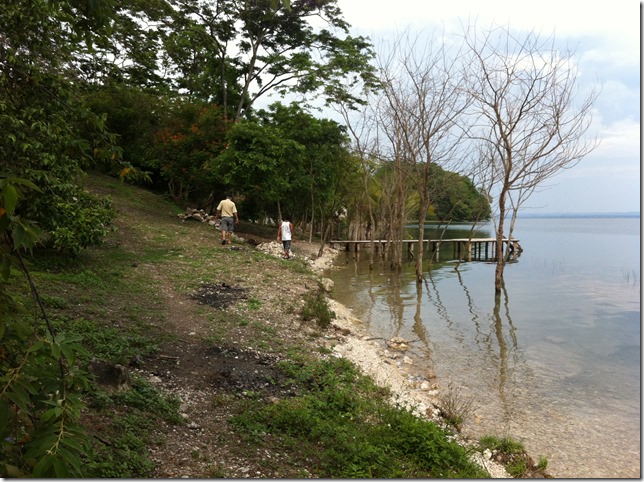 The parcel is 100×100 meters so it is really big, and pretty flat. It has a lot of grass and trees already, that is a great bonus, as our land is quite bare, and will benefit from grass transplants soon. 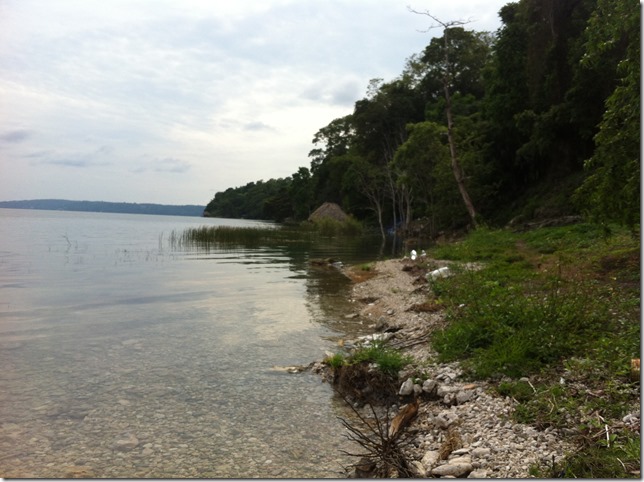 There is already a small basic deck, which is the village’s laundry room as the mayor is not providing water at the moment, looks like the money to pump it is gone… I have been trying to keep people out as they have a public beach nearby where they can pour soap into the lake and litter, but it looks like the notion of private property is pretty foreign to them. 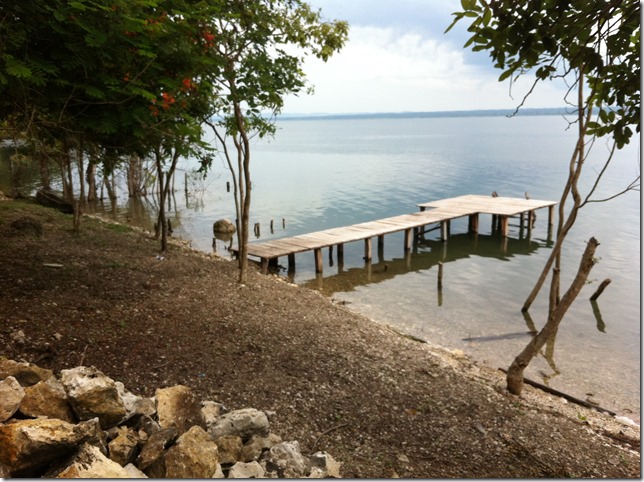 Other than this, Little Napoleon is still the cutest Great Dane around, and getting used to his new digs. He gets his shots at the cattle supplies store where BF buys shots for his cows, loves to run after the chickens and turkeys, and is getting bigger every day! 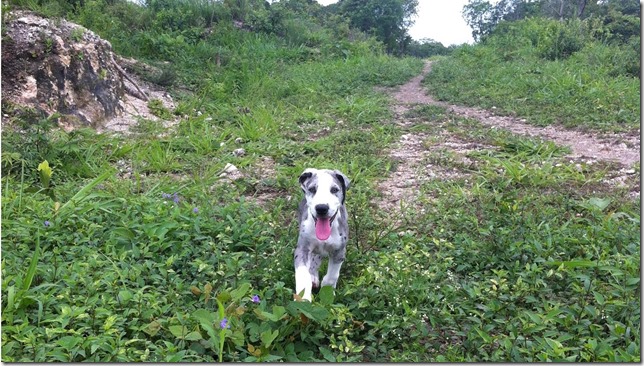 Planning for a secure financial future is a wise decision that you should make for your family. You need to be committed to building wealth and take charge of your money. By investing in the right ... END_OF_DOCUMENT_TOKEN_TO_BE_REPLACED

Cryptocurrency has become a popular investment option in recent years, as more people want to make profits from its white-hot rise. However, cryptocurrency investment is a risky endeavor. It is highly ... END_OF_DOCUMENT_TOKEN_TO_BE_REPLACED

Unsurprisingly, there are plenty of people out there jostling to help you spend your nest egg. All promise high returns, but not all that many deliver; in fact, you can quickly lose your super if ... END_OF_DOCUMENT_TOKEN_TO_BE_REPLACED

If you have recently taken up a position at a brand-new company and opened a 401k for the first time, you may be on the hunt for additional information when it comes to the various ways in which tax ... END_OF_DOCUMENT_TOKEN_TO_BE_REPLACED

Congratulations! You’ve worked hard this year. You made it through some tough days (or weeks or months). And now, if you’re lucky, you might end up with a holiday bonus. But before pocketing that ... END_OF_DOCUMENT_TOKEN_TO_BE_REPLACED

The United States of America is a destination most working professionals and travellers have on their list. Being one of the most visited countries in the world, it houses many tourist attractions, ... END_OF_DOCUMENT_TOKEN_TO_BE_REPLACED