Another instalment already? Yes, but don’t worry, I am done touting my little guest house… for now :). And yes, the updates have come in more frequently than monthly lately, but that is because I was late and stopped posting when we went to Europe. So here you go! If you want to see where we started from day 1, I now made a nice little page with all the links to previous posts about the house and Guatemala in general, like the cost of living, travel tips, etc. Check out my Guatemala page.

The first very exciting piece of news is that we sold some plots on the 90 acres land development! Things have gone really quick since we got our deeds approved, and we signed the contracts on the first few plots, and even did a price hike this week, so hurry up if you want to grab a bargain haha! I got a lovely couple rent my guest house for a week, and by the end of it they loved the place so much they bought their own little piece of paradise! 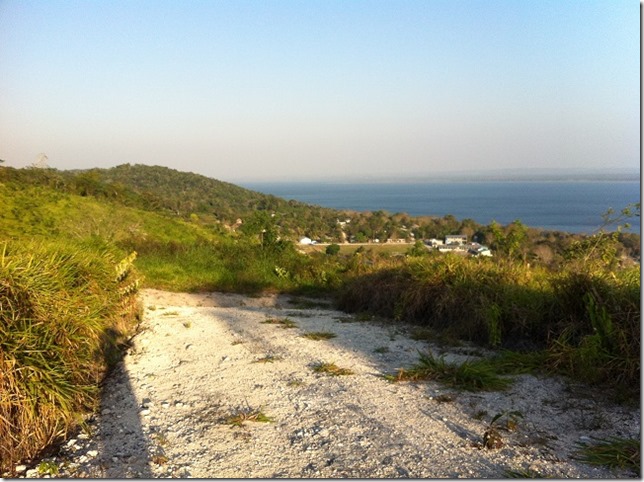 The village and the lake seen from my land

We have to do a few works for them to fence the land and plant a few trees on it, so when they come back it is already nicer than they saw it originally. But first we have to burn the land again like last year, as the grass has been growing like crazy and it will get rid of the last few weeds and prepare a stronger soil. It is this time of year, when you see all the clouds of smoke from ranches burning their land as well, before the rainy season.

The rain has almost stopped after what looked like a never ending winter, and finally the lake is starting to go down, our deck is out of the water but they expect next winter to be strong too so I really hope it goes down some more before going up again. 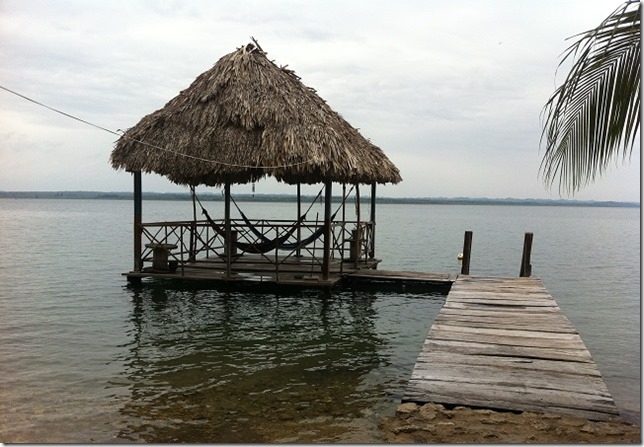 We reached an agreement with the well drillers, they will come drill early in June so we can provide water to our buyers. That is also pretty exciting, we are really ready now, and it is nice to know they will use our drilling fee to drill free wells for people in need.

At the house, I made the decision to build another unit to rent. It will be opposite the room that is currently my bedroom, in a detached construction near the limit of the land. It will be slightly smaller than my room, as travellers don’t need that much storage and closet space. I closed the deal with the workers who did the first room, at just over $3,500 for labor to excavate the land so the room is partially buried in the ground, build the room providing the stones for the wall, do the bathroom with construction block and concrete so it doesn’t get as mouldy as my stone bathroom, do the electricity and plumbing and a flat roof on top that may become a terrace for hammocks and a guest dining room.

On top of that you have to add all the construction materials, the WC, sink, sliding French doors, the wood for the closet doors and other things I probably won’t be reminded about until it is time to write a check. I estimate that will take me to $9,000. Add up another $1,000 to do a small terrace in front of the room so guests can watch the sunset and relax there, as well as a few flower beds and stairs to get to the room, and we have an even $10,000.

As the room’s size was reduced by about 50 sqft I came under my $15,000 estimate. Although there may always be surprises, I told the contractor we had a “no surprises” deal. So if he seals a wall and forgot to put an electric wire inside, I don’t want an electric wire outside, I want him to open the wall back up again and put the wire back. He said “nobody is perfect” and I said since he set his price that he should have accounted for that in the pricing.

It is starting great, as they started digging the wall between 5 men, they dug all that in a day! 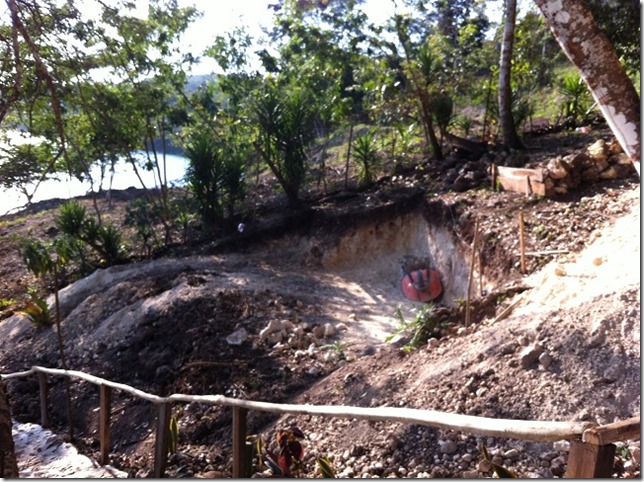 They were expecting (and charging) a very hard earth with tons of rocks, so instead of the $450 he projected to dig the hole, he probably will be able to do it for half that price, leaving me some bargaining power if he ever comes asking for more because another side of the project gets delayed. 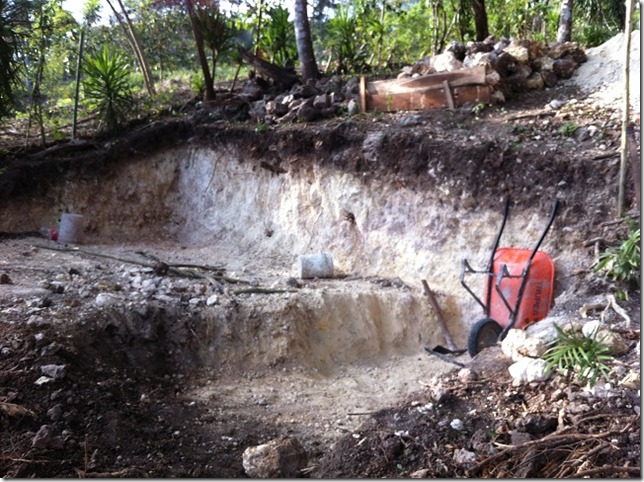 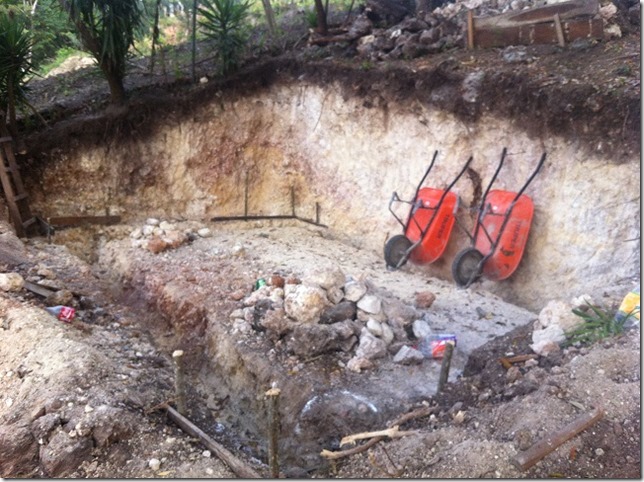 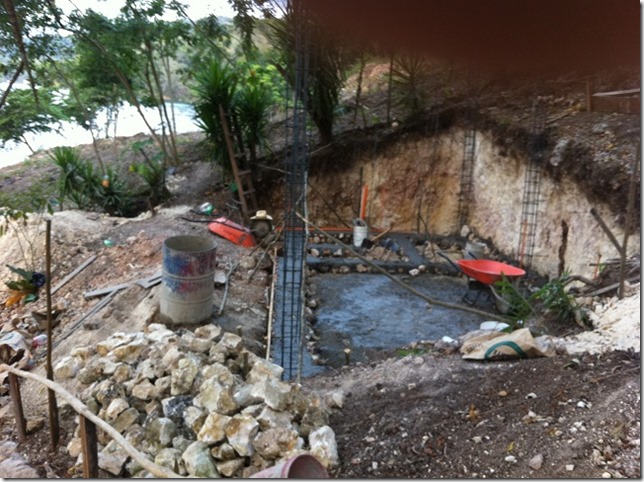 The contractor said he could have the room fully ready in two months! Easter is coming and he won’t be working for 5 days around it, plus I told him I don’t want him to work if I have guests so I am not sure it will be that quick. However that would be awesome as my brother is coming for a month in July and the room would be perfect for him. July and August are rainy so tourism is low, I don’t think I will have many bookings that time of year. I have said in the past that I really don’t enjoy having half a dozen workers doing loud building noises on my land six days a week, but I have to admit that two months, make it four, is pretty short in construction time and they are working quite fast.

Once it is finished, based on my $70 a night rate, I now need 142 nights instead of the original 214 to make my money back. At a conservative 5 nights a month, I could make my investment back in 28 months, a not too shabby 40% annual return.

And now that we sold some plots, I am also hoping that the buyers would want to stay there for a few weeks while they supervise their own homes getting build :).

I am sealing both rooms to avoid nasty critters getting in. You can see a little part that isn’t done yet in the top left corner below, it looks less rustic but is much easier to clean and keep bug free. 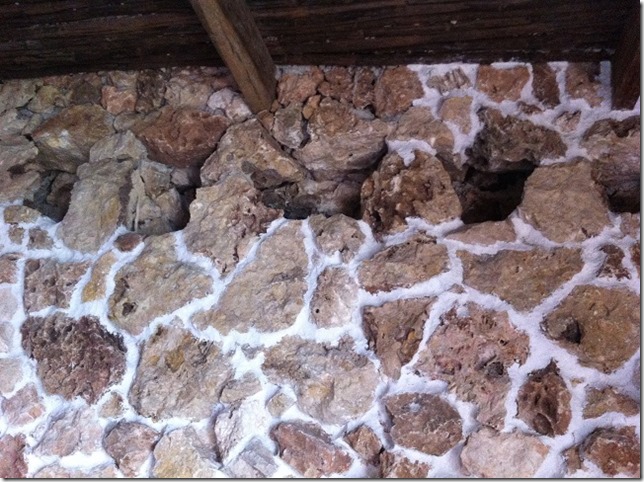 Finally in animal news, there was quite a bit of change. After a guest stayed for a month, he mentioned the goose was really annoying, always hissing and screaming at him, and I had seen the geese go after other animals’ eggs often in the past, so BF took them back to his ranch. Good riddance, for as lovely as they looked when they swam on the lake, they were angry bitter animals.

The turkeys have been having little turkeys, after two failed attempts where the whole bed died, fingers crossed they manage to grow this time because the lady really wants to be a mommy. 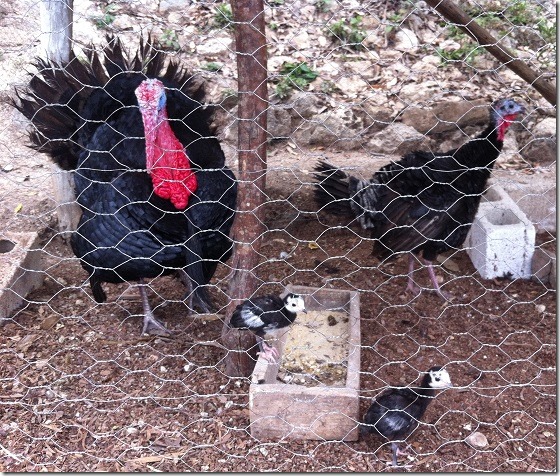 The old chickens have all been killed by yours truly and frozen for future feasts, as I find it really hard to eat them for lunch if I killed them the same day. The little chicks have turned into adult roosters and hens, and there were three roosters fighting all the time for the ladies, so BF took two to his ranch. While we don’t mind the rooster fights, they sing at very odd hours at night, which makes it unpleasant for guests. The remaining rooster has started singing even louder now that he is the only one around, and I am considering getting rid of it too, and keeping only hens for eggs, then eating them and replacing them by buying new ones.

I would like some hens to sit on their eggs before killing the rooster but none so far has seemed eager to do the job, so when there are guests around I have a little hut to lock in the rooster so he doesn’t wake them up at 2am.

The ducks have been lovely and quiet and growing well, from one couple we got 6 surviving kids, then ate the dad, and now they are breeding again and just laid their first eggs. 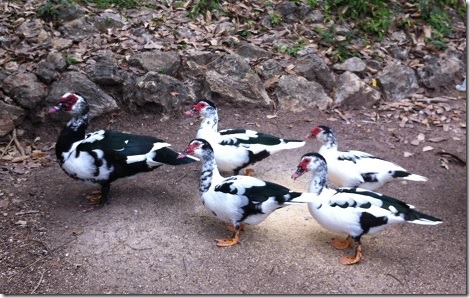 The only thing we lost with the geese were really good keepers, they warn you when someone gets into the property. Like that one afternoon where we were doing siesta and heard two men on the property. They said they were “hunting” but there was no sign of any game, and then they said “we didn’t know it was a private property” which irked us to the point of stopping the police patrol that was coincidentally passing by and reporting them. We think they were hiding in the bush nearby and probably freaked out thinking we had the police on speed dial as the got there less than 10 minutes after. This village is so small that even though they didn’t give their names, we found out who they were by the next day and went to their family to warn that the next time we would file a formal complaint. Come on, you don’t know a fenced property with a house on it is private?? Give me a break. They didn’t take anything be we never found out if they were hunting animals or our treasures. Although I wouldn’t expect anyone to sh*t where they eat and risk getting caught where everyone knows them.

Planning for a secure financial future is a wise decision that you should make for your family. You need to be committed to building wealth and take charge of your money. By investing in the right ... END_OF_DOCUMENT_TOKEN_TO_BE_REPLACED

Cryptocurrency has become a popular investment option in recent years, as more people want to make profits from its white-hot rise. However, cryptocurrency investment is a risky endeavor. It is highly ... END_OF_DOCUMENT_TOKEN_TO_BE_REPLACED

Unsurprisingly, there are plenty of people out there jostling to help you spend your nest egg. All promise high returns, but not all that many deliver; in fact, you can quickly lose your super if ... END_OF_DOCUMENT_TOKEN_TO_BE_REPLACED

If you have recently taken up a position at a brand-new company and opened a 401k for the first time, you may be on the hunt for additional information when it comes to the various ways in which tax ... END_OF_DOCUMENT_TOKEN_TO_BE_REPLACED

Congratulations! You’ve worked hard this year. You made it through some tough days (or weeks or months). And now, if you’re lucky, you might end up with a holiday bonus. But before pocketing that ... END_OF_DOCUMENT_TOKEN_TO_BE_REPLACED

The United States of America is a destination most working professionals and travellers have on their list. Being one of the most visited countries in the world, it houses many tourist attractions, ... END_OF_DOCUMENT_TOKEN_TO_BE_REPLACED