Last week was the village fair, in honor of San Pedro (St Peter), its saint patron. It was a lot of fun, especially the beauty pageant. Out of the 3,000+ inhabitants, only four young ladies were willing to participate, one of them smiling so little that it looked like her parents forced her to do it. BF was nominated as a judge and I was designated a front row site just behind him. How long does it take to elect one beauty queen out of four teenagers you ask? Well it was supposed to start at 7pm, so we were there at 7 sharp, the music was too loud for our sanity so we escaped for a while, it really started around 830pm and lasted past midnight. The girls put their best effort into the show and it was really cute, but while they changed the council had decided on an hyperactive cowboy to provide cantina-like musical interludes and it was pretty painful.

Like, that painful. I made the videos 12 seconds long, we had 5 hours of it.

As we were sitting front row we didn’t hear that the villagers didn’t want the singers to perform anymore but we felt it as every time the singer asked “do you want one more?” no one answered, but he must have been paid by the song because he kept on singing even if the contestants had finished changing and were ready for the pageant.

Anyway, back to the show.

The ladies started with a presentation of the traditional local dresses

Then it was time for a cowgirls choreography 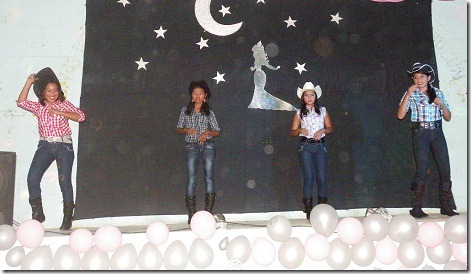 I don’t know what that was, some kind of cheerleading dance, their parents didn’t give permission for a swimsuit show so that was in lieu I guess. 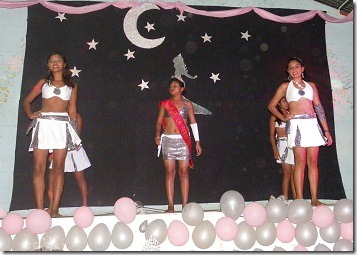 My favorite were those flamboyant costumes representing some Mayan stuff.

It was the most festive and original. It was such a cool show that some people hung from the outside windows for the full 5 hours it lasted 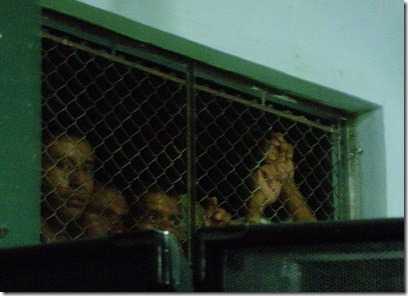 Yes, admission was free but the place was crowded. It only happens once a year! 🙂

Finally, the ladies changed into their evening gown, to do a little speech and answer a question. The speeches were learned by heart, had been rehearsed at home for weeks, and were not very original, but how can you learn from something you have never seen? They had no idea how a pageant participant should act, they had a hard time smiling, standing straight, they were shy and very touching. They shared their dreams, “My biggest dream in life is to become a secretary”. One dared dream all the way to accountant. Their favorite pastime were listening to music or reading, not the Internet and fashion. Their favorite dish? Hen soup. My neighbor told me the questions were no surprises, and had been rehearsed as well, but again it was the first time they spoke in public and they did a great job. They were very natural and shy but it gave them a nice touch of authenticity.

It was a weird mix of American show, with a little bit of traditions, and very loud music. Then four boys appeared and they started dancing to the Spanish cover of Lady in Red. The boys had no idea there would be competing for the first ever Mister San Pedro title but played the game really well.

The Queen got crowned by last year’s Queen over a Spanish cover of My Heart Will Go On. 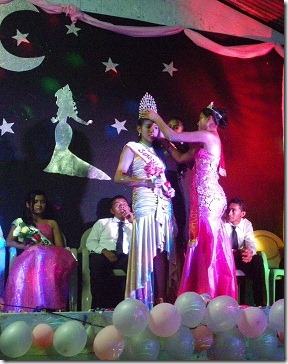 The Queen and King (one of our workers and her real life boyfriend coincidentally). 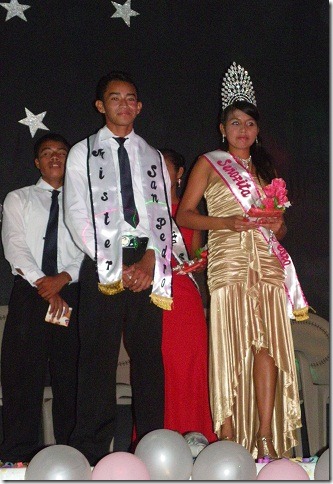 The festivities lasted four more days, one of the big events being the “pato encebado”. I will spare you the pics on that one. They tie a duck to its legs, head down, and hang it in the air. Then each villager gets to try to rip the duck’s head with his bare hands, standing on his galloping horse. The winner will take home a headless duck for lunch.

The fun wouldn’t be complete without a rodeo!

The bulls are awaiting their fighters 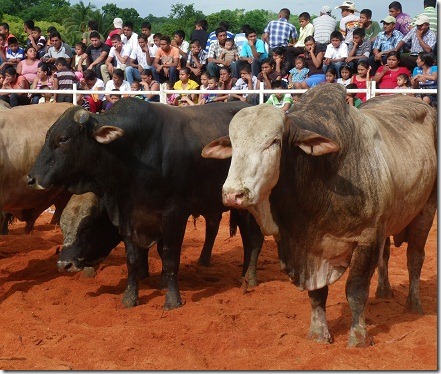 The North of Guatemala sometimes looks like the Far West. Lots of cow boys, cattle breeders, and the laws have a hard time being respected. It is illegal to carry a gun that can be seen by other people. 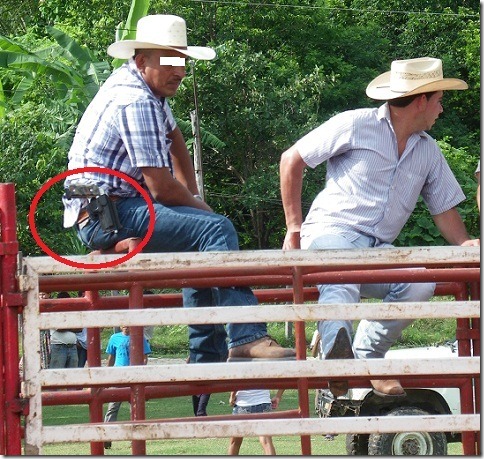 But if you’re going to do it anyway, better bring ammunitions. For a soccer game, 4 racks should suffice. 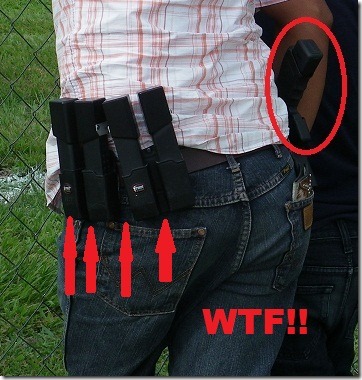 530pm, the 2pm rodeo is about to start. Bullfighters say a quick prayer 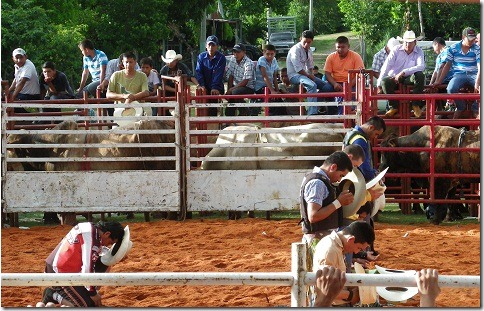 Time to get on the bull 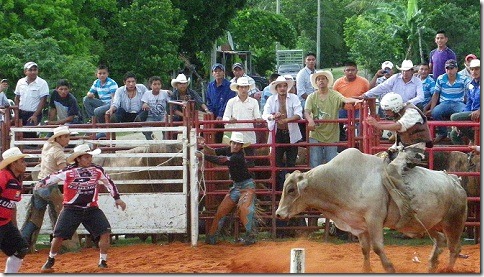 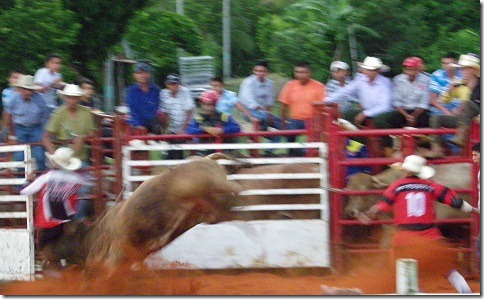 The doppelganger of some Mexican singer comes for an interlude 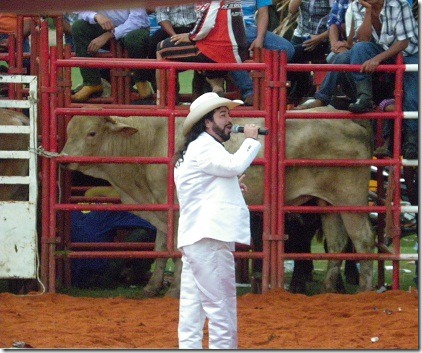 There were dances, a couple more live performers, and the traveling shooting stands you find in any small town fair. I was pretty impressed by the size of the event for such a small village.

We took advantage of the fair to meet more villagers, get known and talk about our land development. As BF was the beauty pageant’s judge, he became a celebrity and it was funny being invited to eat in houses of people we had never met or having random stranger calling him by his first name when saying hello in the streets.

How did your week go?

Unsurprisingly, there are plenty of people out there jostling to help you spend your nest egg. All promise high returns, but not all that many deliver; in fact, you can quickly lose your super if ... END_OF_DOCUMENT_TOKEN_TO_BE_REPLACED

If you have recently taken up a position at a brand-new company and opened a 401k for the first time, you may be on the hunt for additional information when it comes to the various ways in which tax ... END_OF_DOCUMENT_TOKEN_TO_BE_REPLACED

Congratulations! You’ve worked hard this year. You made it through some tough days (or weeks or months). And now, if you’re lucky, you might end up with a holiday bonus. But before pocketing that ... END_OF_DOCUMENT_TOKEN_TO_BE_REPLACED

The United States of America is a destination most working professionals and travellers have on their list. Being one of the most visited countries in the world, it houses many tourist attractions, ... END_OF_DOCUMENT_TOKEN_TO_BE_REPLACED

When you were a kid, did you ever save quarters in a jar? Or set aside a portion of your allowance in a piggy bank for a big purchase, like a bicycle, a pair of designer shoes, or anything that mom ... END_OF_DOCUMENT_TOKEN_TO_BE_REPLACED

No matter where you are in your career, the potential of eventually retiring can be a daunting experience to think about. Are you saving enough for the future? If you are, when will you have enough ... END_OF_DOCUMENT_TOKEN_TO_BE_REPLACED