Today, I have teamed up with Shannon from The Heavy Purse and a group of awesome bloggers to talk about getting financially real with your finances. You can read the other posts over at The Heavy Purse. 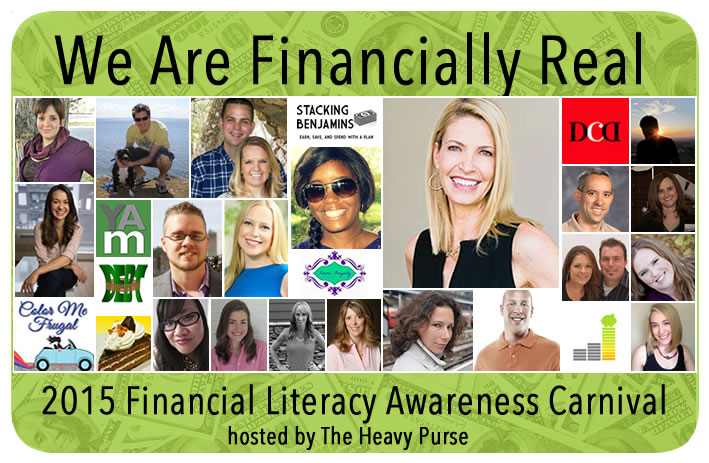 I know a lot of people live in denial with their finances. That may mean knowing you need to make way more money to sustain your lifestyle, yet charging a bit more to your credit cards every month. Or knowing you can’t really afford this or that, that new car on credit, that house twice as big as what you really need, or that amazing dress, yet going for it, crossing fingers it will all turn out ok, and hoping for the best. I was really never an optimist when it came to finances, I had to work my way through college, doing all sort of odd jobs to pay the rent, and I was always afraid something might go wrong, so I was always saving for a rainy day.

But as things got better, I realized I would always be able to do something, whatever it was, to pay for my basic expenses. So I got comfortable. Things got so much better I had no idea how much I was really making. There was money from a day job, money from side jobs, money from personal endeavors like freelance writing or selling stuff I had in storage. I had no idea how much I was spending either. I was never crazy about buying stuff I didn’t need. I always thought what I wanted was reasonable, and I should have it since my needs were few. But if I wanted to really plan for my future, the numbers were vague at best.

That is when I realized I was doing something wrong. I was earning decently, yet claiming every single expense was justified because I wanted it. “Oh, I work so hard, I really deserve a holiday four times a year”.  “I shouldn’t think twice about buying that $500 gadget, since there is money in the bank for it. It won’t put a dent in my budget”. Being in the green every month doesn’t mean you are doing it right.

Sure, you are better off than many who live beyond their means. But if you have such a big goal in mind as financial independence, it is going to take more work than this. You need to get real about your situation. Set a number, off which you can comfortably live for the rest of your life. Set a safe withdrawal rate, usually under 4% a year, so you know your investments will keep providing for you for as long as you shall live.

That means if you want to live on $30,000 a year, you need a $750,000 nest egg. That means you have to live on $2,500 a month, and every $85 you spend is taking you one day away from financial independence. Suddenly, that fancy dinner, dress or gadget is taken into perspective. You can choose to have it, since you are doing so great, or you can choose to do without, and reach your goal one day sooner. And a day isn’t much into the grand scheme of things. But those days add up. And suddenly you are a month, or even a year behind.

For me, getting financially real meant putting all expensive in the balance, and wondering whether they were worth working an extra day for. Would foregoing that trip to Europe be worth a couple of months of freedom? If it meant being with my friends and family, probably. If it was just about seeing new places I could enjoy anyway a few years from now when being financially independent, probably not.

You  may think you are doing well, but only when you really crunch the numbers will you realize you are doing just ok, or excellent. Every financial decision you make should be carefully thought through, so you are confident you made the very best decision in accordance to your principles, and your financial goals. Otherwise, for as much as you say you want to get to a point, you will get delayed by a spur of the moment.

How about you? When did you get financially real?

Planning for a secure financial future is a wise decision that you should make for your family. You need to be committed to building wealth and take charge of your money. By investing in the right ... END_OF_DOCUMENT_TOKEN_TO_BE_REPLACED

Cryptocurrency has become a popular investment option in recent years, as more people want to make profits from its white-hot rise. However, cryptocurrency investment is a risky endeavor. It is highly ... END_OF_DOCUMENT_TOKEN_TO_BE_REPLACED

Unsurprisingly, there are plenty of people out there jostling to help you spend your nest egg. All promise high returns, but not all that many deliver; in fact, you can quickly lose your super if ... END_OF_DOCUMENT_TOKEN_TO_BE_REPLACED

If you have recently taken up a position at a brand-new company and opened a 401k for the first time, you may be on the hunt for additional information when it comes to the various ways in which tax ... END_OF_DOCUMENT_TOKEN_TO_BE_REPLACED

Congratulations! You’ve worked hard this year. You made it through some tough days (or weeks or months). And now, if you’re lucky, you might end up with a holiday bonus. But before pocketing that ... END_OF_DOCUMENT_TOKEN_TO_BE_REPLACED

The United States of America is a destination most working professionals and travellers have on their list. Being one of the most visited countries in the world, it houses many tourist attractions, ... END_OF_DOCUMENT_TOKEN_TO_BE_REPLACED