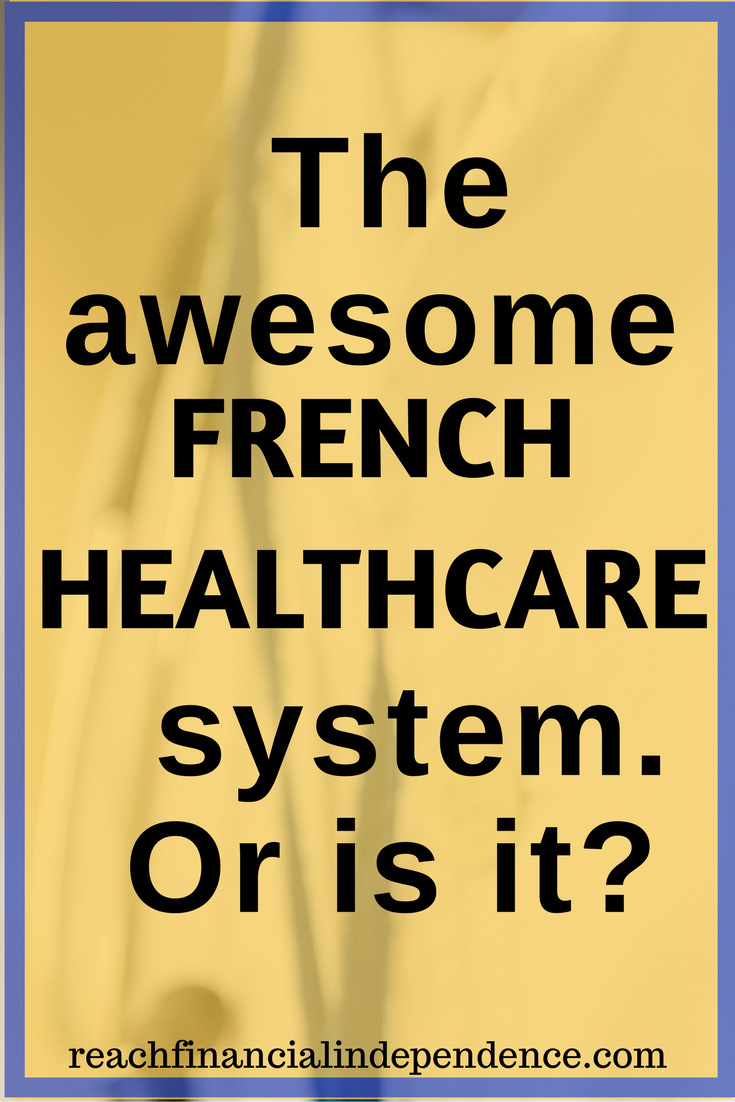 With all the talks around about the US healthcare system and how we are much better off in Europe, I wanted to explain how the French healthcare system works and why it is so awesome and so broken at the same time.

In France, healthcare is universal. Everyone has access to social security, whether you have a job, are looking for one, or are homeless. If you have a job, a % of your salary goes to fund the Social Security. If you don’t, a % of your benefits above a certain minimum goes to fund SS as well. If you are homeless or earn under $10K per year, you can apply for universal health insurance, that will cover ALL your medical bills.

When we go for a routine checkup with a GP, prices are fixed, at the moment at 23 euros ($30) a visit. 70% is refunded by Social Security, so you have to pay 6.9 euros ($9) to see a doctor, unless you have health insurance, which would cover that, or you earn under $10K, then you pay nothing. Same for prescription drugs and anything your GP refers you to.

Now you always need to get the GP to determine if you need more tests, scans or to see a specialist. If you go straight to a specialist (except dentist, ob/gyn and ophthalmologist), you will have to pay 100% of the fee.

Alternative therapies are being covered, like acupuncture and homeopathy, you can even get a thermal cure to treat depression, paid by Social Security! Psychotherapist? Covered. Want to stop smoking? Covered. And so on.

Every five years, you are entitled to a full checkup for free, with hearing, eye and teeth exams, scan of your lungs if you smoke, blood test, etc. Whatever they find out during that checkup will be taken care of for free.

If you are pregnant, since there aren’t enough beds in public hospitals, you can choose a fancy private clinic to have your baby, courtesy of Social Security. For other private treatments, you will be covered at 70% of the public rate, and will have to cover the other 30% and private care premium. Say a private GP charges 50 euros, you would have to cover the 27 euros premium for private care, and the usual 30% of 23 euros like any visit.

The fixed prices of medical acts are set by Social Security and rarely revised. A GP needs to see many many patients to make a decent living on 23 euros a visit and they don’t care for you as well as a 250 euros doctor.

Since they are overwhelmed by patients, for a routine checkup you may have to wait several weeks, and several hours for them to squeeze you in between patients if you show up for an emergency. The same goes for the ER, hospitals are generally under staffed.

Doctors used to make house calls, they rarely do anymore.

Dental acts are priced even lower for basic treatments, a cavity is set at around 25 euros and a root canal around 80 euros. A 25 euros cavity will take longer than a 23 euros GP visit, and the dentist will have invested in more gear, seat, drills, radio equipment, etc. and studied four more years than a GP. Dentists loses money when performing those acts, but they have to in order to keep a clientele. Then they push you to get a crown and overcharge to make up for the rest. A crown, like other acts considered cosmetic, is priced freely, but SS will only refund70% of its set rate, currently 110 euros. This rate hasn’t been revised in years. Generally the dentist charges 900 euros or more. They will try to push it even when not necessary. Or do illegal stuff, like getting the implants and crowns from China and not respond when it breaks.

Dentists will also rarely see you for long periods of time if you need extensive treatment. You will get an hour per week, like everyone. In the meanwhile, the temporary fix will deteriorate, and the cavity worsen. In Guatemala, you can see a dentist highly trained in the US for the whole afternoon, until your whole mouth is fixed. Many rush their work and do not cure you entirely. I had an infection in France after a root canal that left my face so swollen I couldn’t open one eye, and it was a complete oversight from a bad dentist.

The high cost of some acts, and time it takes to get treated, especially for dental, pushes patients to seek treatment abroad (that is partly refunded by SS, at the same rate it would in France, in all EU countries and a few more), and puts even more strain on the doctors who lose their most lucrative procedures to foreign doctors.

It also prevents doctors from pursuing excellence and expensive specializations. Rare are the doctors who train for more, learn new acts over the course of their careers, try new products or buy new equipment. Many practice a medicine from 50 years ago, for lack of means to make it quicker and less invasive for the patient.

You can get a free abortion but have to pay for contraception, so many women go with the free option.

That system had a huge deficit, due to poor administration and abuse from patients who were seeking treatment and pills all the time. If you have private healthcare on top of the 70% SS cover, you can go to the doctor and get pills for free, while going to the pharmacy and getting a box of Ibuprofen will cost you. There were many campaigns asking people to stop being  abusive, as well as attempts to cut costs and lower the reimbursements on some acts, but the system is still in bad shape.

Good or bad, we manage to have one of the highest life expectancy in the world, well over 80 years. But that may be due to wine. If you relocate to France, companies can help you figure out international healthcare.

How do you do healthcare? Would you rather be on the French healthcare system?

This post was featured on PF Digest, Are Ya Gonna Eat That,

The Outlier Model, thank you!

Planning for a secure financial future is a wise decision that you should make for your family. You need to be committed to building wealth and take charge of your money. By investing in the right ... END_OF_DOCUMENT_TOKEN_TO_BE_REPLACED

Cryptocurrency has become a popular investment option in recent years, as more people want to make profits from its white-hot rise. However, cryptocurrency investment is a risky endeavor. It is highly ... END_OF_DOCUMENT_TOKEN_TO_BE_REPLACED

Unsurprisingly, there are plenty of people out there jostling to help you spend your nest egg. All promise high returns, but not all that many deliver; in fact, you can quickly lose your super if ... END_OF_DOCUMENT_TOKEN_TO_BE_REPLACED

If you have recently taken up a position at a brand-new company and opened a 401k for the first time, you may be on the hunt for additional information when it comes to the various ways in which tax ... END_OF_DOCUMENT_TOKEN_TO_BE_REPLACED

Congratulations! You’ve worked hard this year. You made it through some tough days (or weeks or months). And now, if you’re lucky, you might end up with a holiday bonus. But before pocketing that ... END_OF_DOCUMENT_TOKEN_TO_BE_REPLACED

The United States of America is a destination most working professionals and travellers have on their list. Being one of the most visited countries in the world, it houses many tourist attractions, ... END_OF_DOCUMENT_TOKEN_TO_BE_REPLACED