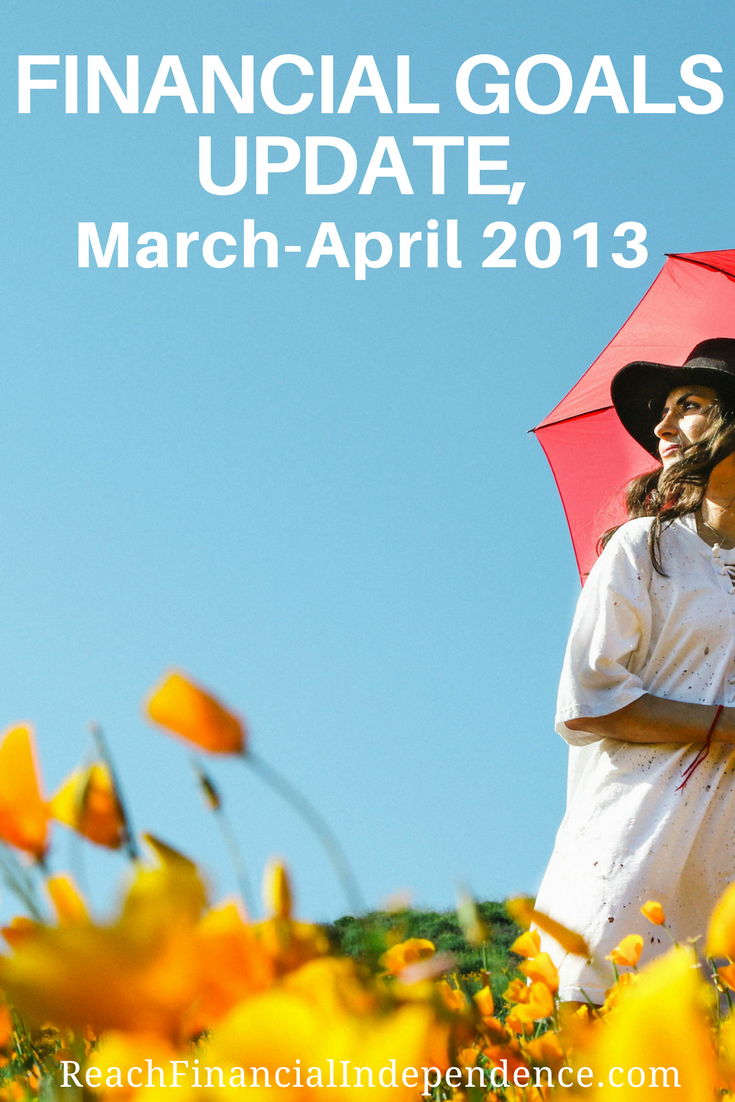 On January 1st, I set a number of financial goals, and will update every couple of months through the year. Here is the second  review. You can check the March one here.

The main financial goal was to grow my net worth by 30%. I still haven’t updated any of the $20K we put on house improvements and don’t include buying a car into my net worth, so while it has been a pretty expensive first quarter, my net worth is still up by 5%!

A little behind, although it is still a strong 5 figures jump and I expect most of the growth to come on the second half of the year via selling some plots on my 90 acres land.

Second financial goal was to pay $25,000 of debt that was used to finance several investments over the past years. I have paid $9,500 to close a loan in January plus $750 in capital each month totaling $12,500. I have over $10K on a 0% credit card ending in June, and the money is already on my account, bringing interest in the meanwhile. I thought about doing some creative investing but that means risky and I don’t want to start paying 20+% interest or look for a 0% deal again.

Sell plots on the 90 acres land to get back the purchase price.  We have not been able to sell plots because we are still waiting for the property deeds from the council. This one big plot has been divided into 250+ and our buyers are just waiting for that paperwork to come through before they buy, or else they would have no guarantee. I think we’ll have to wait for a couple more month. ONGOING

25 times more blog income than 2012. That goal was revised in March. Here is the accumulated total.

I am doubling that goal once more, and reaching for 50 times more! Remembering that the blog income in 2012 was only for Q4. Things have really picked up since February and 50 times is going to be a stretch although it looks possible.

Take a trip back to Europe: Bonjour from France! I’m there as you read this, and will stay for four weeks. PASS

Take a trip to the US: Ongoing goal, since we bought a car, I had to use the money. Not that I budget much, but there was no time at the moment, maybe around September.

Not too bad! I am very happy with the online income and thinking about investing the proceeds in something fun. More details on that once I’ve made a decision!

I want to set more goals since most are reached but don’t have an idea just yet, the land development is taking most of my time. See you in two months!

Planning for a secure financial future is a wise decision that you should make for your family. You need to be committed to building wealth and take charge of your money. By investing in the right ... END_OF_DOCUMENT_TOKEN_TO_BE_REPLACED

Cryptocurrency has become a popular investment option in recent years, as more people want to make profits from its white-hot rise. However, cryptocurrency investment is a risky endeavor. It is highly ... END_OF_DOCUMENT_TOKEN_TO_BE_REPLACED

Unsurprisingly, there are plenty of people out there jostling to help you spend your nest egg. All promise high returns, but not all that many deliver; in fact, you can quickly lose your super if ... END_OF_DOCUMENT_TOKEN_TO_BE_REPLACED

If you have recently taken up a position at a brand-new company and opened a 401k for the first time, you may be on the hunt for additional information when it comes to the various ways in which tax ... END_OF_DOCUMENT_TOKEN_TO_BE_REPLACED

Congratulations! You’ve worked hard this year. You made it through some tough days (or weeks or months). And now, if you’re lucky, you might end up with a holiday bonus. But before pocketing that ... END_OF_DOCUMENT_TOKEN_TO_BE_REPLACED

The United States of America is a destination most working professionals and travellers have on their list. Being one of the most visited countries in the world, it houses many tourist attractions, ... END_OF_DOCUMENT_TOKEN_TO_BE_REPLACED