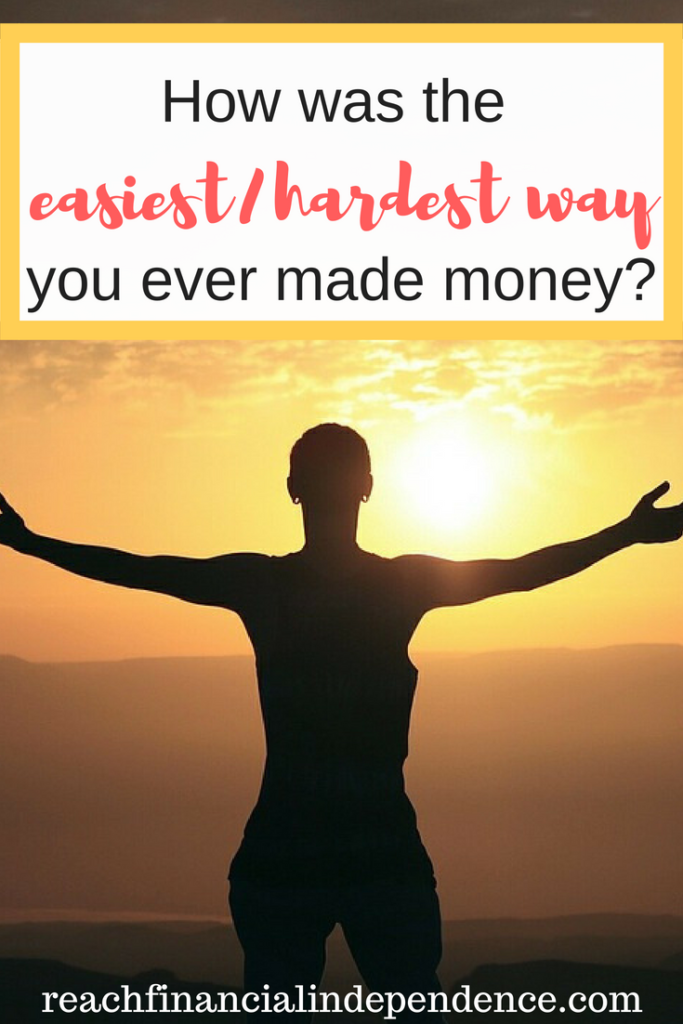 What was the easiest and/or hardest way you ever made money?

Easiest ways I have made money

I think I’ll have to go with my cattle investment first.  I just gave BF the money to buy calves, he bred them, oversaw the cowboys, paid their salaries and the anti-parasite shots for the animals, then we weighted them 18 months later and I made a 40% return.

Second next was when I was a waitress at Haagen Dazs on Paris’ most prestigious avenue, the Champs Elysées. A family of Saudi sat in my zone, and ordered ice cream. The bill came to around 20 euros, the guy gave me a 100 euros bill saying “you can keep the change”. You may know that the French almost NEVER tip, as a waitress I made about 10 euros an hour ($13) and the rare table would leave 50 cents or 1 euro as a tip. On the Champs Elysées it was awesome because most customers were tourists and they were tipping like I had never experienced. I would go home with two to three times my salary in tips, but that Saudi guy was the most amazing one.

I got paid to try lipsticks. I had to go to a place, pick up samples, try them, and drop my feedback a week later. I can’t remember where it was or I would go back for more samples. They were Yves Saint-Laurent!

The perfect baby-sitting gig. The kid was 18 months. I got there at 6pm, he saw his parents leave and waved cheerfully goodbye, then went to bed without crying. He was already fed, changed and ready to go down. I sat there for 5 hours, he did not wake up, I got paid.

The per diems. I had a job that included quite a bit of travel, and often to Paris, my hometown. They had a per diem, so for every meal while traveling for work you got $15 and every hotel night was compensated at $150. I got paid $165 to sleep at my mum’s, in my own bed, and have dinner with her.

Hardest ways I have made money

If we look at the rate per hour, I remember having worked a whole day and evening for $20 when I was a teen. My aunt worked in a library and they needed help to do the inventory, it was a tedious job, we were counting and listing books by hand (it was in the 1990s!), I was hungry, we finished really late, and the guy gave me $20. It is about $40 today so it was not so bad for a 12 year old, I remember I was happy to get so much money, but the hourly rate was just appalling, actually I think we went back the next day for most of the day too, and that may have been money for the two days.

Talking about taking advantage of teenagers, once I had a baby sitting gig, I must have been 12 or 13 too. A family I didn’t know, they were supposed to have 2 kids to watch, there were 4 including a baby who was just a few months old. It was hell for the whole afternoon, the baby didn’t stop crying and the kids were insufferable. When the mum came back, later than expected, she changed the agreement we had about my rate, and imposed the discount she wanted, say she owed 4 hours at $10, she said “let’s round it to $25” and pushed me through the door. Bitch.

When I was a girl scout, we would spend the days around Christmas bagging groceries at the supermarket, or packing Christmas presents at a toy store. If you have ever tried to pack a giant stuffed bear, you know the pain. Once again, we were counting on tips, and the French are really stingy, and not big on charity. The guys with 5 gigantic toys would still tip 2 euros after you spent half an hour finding a way to wrap paper around the most improbable shape. And the money was not even going in my pocket, so I think I would rather have stayed home and written a check to the girl scouts.

My most boring job was conducting satisfaction surveys in a call center. People would hang up on me all the time, but thankfully it still paid minimum wage. I would look at the watch while thinking about the money I was making and what I would buy with it. “15 minutes more, I can go out with my friends on Saturday.” “Oh, Friday already, my rent is paid!” And I eventually managed to know when the manager was listening to my conversations so as soon as he was offline I completed a couple of surveys at light speed to fill my quota.

And I have been in waitressing hell too. At Disneyland Paris I was in a tavern style restaurant for a while, carrying the biggest trays I’ve ever seen in the industry. Your feet hurt, your back hurts, the kids are cranky, the parents are exhausted by all the attractions and the walking around, and the queues, and looking at your overpriced menu where nothing looks good… it is not the happiest place on earth. One manager saw I wanted more money and asked me to come work more, then “forgot” to write down my additional hours on my paycheck. The hours were illegal since you have to go home for 12 hours after work, if you finish a shift at 11pm you can’t start before 11am the next day and he would ask me to come at 8am, which I would do but then find out he didn’t pay.

That’s it, over to you, how have you made your easiest/hardest buck?

Planning for a secure financial future is a wise decision that you should make for your family. You need to be committed to building wealth and take charge of your money. By investing in the right ... END_OF_DOCUMENT_TOKEN_TO_BE_REPLACED

Cryptocurrency has become a popular investment option in recent years, as more people want to make profits from its white-hot rise. However, cryptocurrency investment is a risky endeavor. It is highly ... END_OF_DOCUMENT_TOKEN_TO_BE_REPLACED

Unsurprisingly, there are plenty of people out there jostling to help you spend your nest egg. All promise high returns, but not all that many deliver; in fact, you can quickly lose your super if ... END_OF_DOCUMENT_TOKEN_TO_BE_REPLACED

If you have recently taken up a position at a brand-new company and opened a 401k for the first time, you may be on the hunt for additional information when it comes to the various ways in which tax ... END_OF_DOCUMENT_TOKEN_TO_BE_REPLACED

Congratulations! You’ve worked hard this year. You made it through some tough days (or weeks or months). And now, if you’re lucky, you might end up with a holiday bonus. But before pocketing that ... END_OF_DOCUMENT_TOKEN_TO_BE_REPLACED

The United States of America is a destination most working professionals and travellers have on their list. Being one of the most visited countries in the world, it houses many tourist attractions, ... END_OF_DOCUMENT_TOKEN_TO_BE_REPLACED