Before buying my lakefront house in Northern Guatemala, I lived for almost a year on the Southern Pacific Coast, right on the beach. I love having water around, although beach living is different from lake living, and there are several aspects to take into consideration when you choose one or the other. 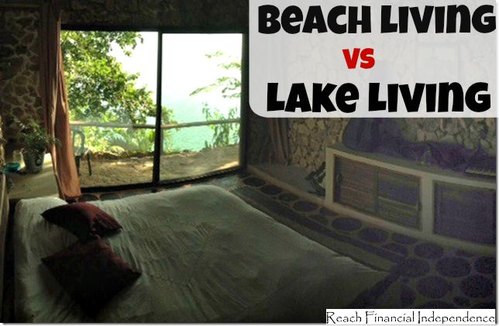 I love seeing the water from bed

Like seasons, tides mark a rhythm of things coming and going, and are pretty nice. Until you have a really big one, or a tsunami, and your house gets washed out. Sure, you can always claim damages to your insurance, but insurance companies are there to make money and it is very likely that they won’t cover it all.

Buying an old beach house is good as you know it has survived storms already, although you don’t know if the structure is still strong. And water levels are expected to rise 2-7ft by the end of the century. In Guatemala’s lake Atitlán, the historical villages were about 500 meters from the lakeshores. Then foreigners came and built right by the water. 30 years later the waters rose and they now have their feet in the water.

I’d say lake living wins because it is way less probable the lake will rise, although it happens sometimes.

I admire people living on cliffs and always wonder when they will have to abandon their house due to land erosion. The sea eats everything, and if you buy right on the beach, chances are you will be closer and closer from the water every year, until it reaches your house. Not today, not tomorrow. But it is a possibility within the term of your 30 year mortgage.

Lake wins this one.

After about six month of living on the beach, my laptop died. I took it back to the store as it was still under warranty, and was told it was because the sea salt had infiltrated the hard drive and the fan, so all the inside components were rusty. I never used it right on the beach, or poured salt water on it, it was just the regular sea breeze’s doing.

They were kind enough to change my hard drive for close to nothing, but it was not something the warranty would cover. Everything rusts in a beachfront house. Your fridge, your washing machine, dryer, any appliance. Even more if you don’t use them regularly. If the house sits empty for six months, expect to find some damage.

The same goes if you have a metal structure, roof or deck. Unless you cover it with very expensive anti corrosive paint and apply regular coats, you will find it eaten by the sea.

Around the lake, the house is a bit humid but there is no such thing as salt erosion. Lake wins.

I love the sea because I feel it is infinite. You can go around my lake in a couple of hours. So sailing, diving, water-skiing, fishing… everything is more exciting by the sea. And I feel like lake living is less social, with everyone spread around the lake, whereas the beach attracts lots of people every summer, and is globally more dense.

Beach wins, except if you are a true clear water fisherman or an hermit.

Ever been by the sea in winter? That is a pretty depressing sight. You probably fell in love with the beach when it was sunny, warm outside, the shops and restaurants were filled with happy people, and forgot that six months of the year, when tourists are gone, the town hibernates and looks like a ghost town. Seasonal workers move to the mountains for the ski season and it’s just a bunch of old people and fishermen.

Some lakes are the same. I was in Tahoe the day the ski season closed and it was morose as well. And in Florida, the sea is nice all year long.

Unsurprisingly, there are plenty of people out there jostling to help you spend your nest egg. All promise high returns, but not all that many deliver; in fact, you can quickly lose your super if ... END_OF_DOCUMENT_TOKEN_TO_BE_REPLACED

If you have recently taken up a position at a brand-new company and opened a 401k for the first time, you may be on the hunt for additional information when it comes to the various ways in which tax ... END_OF_DOCUMENT_TOKEN_TO_BE_REPLACED

Congratulations! You’ve worked hard this year. You made it through some tough days (or weeks or months). And now, if you’re lucky, you might end up with a holiday bonus. But before pocketing that ... END_OF_DOCUMENT_TOKEN_TO_BE_REPLACED

The United States of America is a destination most working professionals and travellers have on their list. Being one of the most visited countries in the world, it houses many tourist attractions, ... END_OF_DOCUMENT_TOKEN_TO_BE_REPLACED

When you were a kid, did you ever save quarters in a jar? Or set aside a portion of your allowance in a piggy bank for a big purchase, like a bicycle, a pair of designer shoes, or anything that mom ... END_OF_DOCUMENT_TOKEN_TO_BE_REPLACED

No matter where you are in your career, the potential of eventually retiring can be a daunting experience to think about. Are you saving enough for the future? If you are, when will you have enough ... END_OF_DOCUMENT_TOKEN_TO_BE_REPLACED