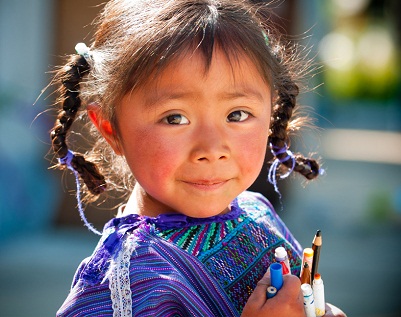 Useless random fact: French people are terrible with charity. We almost never give a thing to our alma mater, our charity donations are $50 at Christmas and giving $3 at mass on Sunday is considered generous, so much that when the Euro came along, the church begged people who used to donate a 10 francs coin (1.5 euro, about $2) to give 2 euros  ($2.60) instead of a 1 euro coin ($1.30) because the donations had decreased.

Seeing many US bloggers tithe, or pledge a portion of their income to charity (or all their blogging income like Free Money Finance or Gajizmo) has inspired me and I have decided to pledge 10% of my blog income to charity. I have always had a strong interest in education, particularly for girls, who tend to have less chances than boys in developing countries.

Helping a girl have access to education will hopefully help raise an independent woman, who will in turn raise independent little girls, and manage her home well. Having learned about hygiene, she will keep her kids from getting sick. Having attended math classes, she will take good care of the family finances. Being able to earn an income, she won’t have to bear an abusive husband.

What I love about sponsoring a child is that you see directly where your money is going. There are a few NGOs around who do things but you are never too sure your money will be used for a project, and said project will be optimized in costs.

Part of the sponsorship is meant as an allowance for the family, so they don’t take their child out of school to work in the fields. It basically covers the child’s food and education costs so it costs nothing to the family to have a kid in school.

My neighbor is a lovely Spanish lady who has been involved with the village’s school for a long time, and is currently sponsoring a few kids, either via foreign sponsors who send her money, or directly. I went to seek her advice.

Before I talked to my neighbor, I had in mind two scholarships, one based on academic merit, one for the most deserving girl who wants to pursue further education, and one for the most motivated one who would like to learn a trade in a year or two (a cooking course, hair cutting or sewing class, etc). The first one will probably never have the opportunity to pursue her dream otherwise, and the second one will have a skill that can be put to good use in the village, bringing her an income and some financial independence from her future husband, as well as some economic dynamism to the village.

The kids here get to the end of middle school when they are 14-16 years old, and are not off to work already. Then they have to go to another village, 20 miles away, to go to high school. You can either send them to a public school 20 miles away, and pay for their books, uniform and bus fare, or for a similar price, send them to a great boarding school 100 miles away, where they will study more and graduate with a high chance of finding a job.

It is a bit tough because you have to convince the girls’ families to let their daughters go away Monday to Friday, and if they agree, the girl may drop out before she finishes high school, if she becomes pregnant or gets married, which is not uncommon at 18.

The only string attached is they keep their grades up. I don’t pretend they write a thank you letter or make a drawing, but the do have to keep doing well at school.

At the moment, my neighbor has a few kids in middle school that she sponsors at $15 a month, so they can pay their bus fare to get to a closer village 6 miles away and get computer classes once a week.

A few students are in boarding school and that costs around $2,000 for a year, or $170 per month. That includes a lot of things they have to purchase on the first year, like their mattress (I thought that was weird!), uniform, books, and even weirder, a light bulb to light their room, that will set me back $0.50 haha. Boarding school is three years and my neighbor is trying to get a pledge from other sponsors to be able to send the best kid there every school year, which would be a great incentive for them to work hard all year.

If you pay their bus fare to go to public school nearby, just the daily bus fare costs $70 a month, plus school supplies and books, and a small stipend for their living expenses, you would spend about the same and the education would not be that good.

(Yes, the bus fare is ridiculous at $3 round trip when many people make less than 10 a day, and the drivers wouldn’t do a student discount unless all students show up every single day together, which is virtually impossible, and even then the discount was $0.25 return. The bus is a private service, not heavily subsidized like Western public transports.)

If I have more than $300 a month to pour into that project, I will save it. For every $200 saved, I will sponsor one middle school girl for a year. You can’t sponsor for a month and leave them hanging.

Since the village’s beauty pageant, I noticed one of the contestants, who wanted to go to law school. She looked too serious to be in a beauty pageant, and comes from a modest family, so could be a good fit.

My neighbor also told me about a young boy who wants to study to become a nurse, and his class would start in September, but I will try to see if there is a girl who is as deserving first.

What do you think? Have you ever sponsored a child? How did it go?

This post was featured on the Planting Our Pennies, Streets Ahead Living, Carnival of Personal Finance, How to Blog Carnival, Eyes on the Dollar, thank you!

Whether you’re between jobs, facing unexpected new expenses or just trying to stay on top of your finances, there are plenty of good reasons to review – and refine – your budget. Adjusting to a ... END_OF_DOCUMENT_TOKEN_TO_BE_REPLACED

This is a guest post from Chris Alarcon. Chris's obsession with financial independence led him to create the Financially Well Off blog, and to interview entrepreneur rockstars like JLD from EOFire and ... END_OF_DOCUMENT_TOKEN_TO_BE_REPLACED

This is a guest post from Jason Butler. Jason is the owner of My Money Chronicles, a website where he discusses personal finance, side hustles, travel, and more. Jason is from Atlanta, Georgia. He ... END_OF_DOCUMENT_TOKEN_TO_BE_REPLACED

6 Benefits Of Investing In Gold

As symbols go, there’s nothing more as enduring than gold—it’s been a symbol of wealth and power for thousands and thousands of years. There’s something about this shiny metal that has attracted ... END_OF_DOCUMENT_TOKEN_TO_BE_REPLACED

This is a guest post from Joey Cohn, let me know if you would like to guest post on RFI! Joey Cohn is the creator and author of HardlySimple.com.  He aims to help people reach and maintain a ... END_OF_DOCUMENT_TOKEN_TO_BE_REPLACED

I love New York. After Paris, it is probably my favorite city in the whole world. My mum took me there to visit some family when I was 15, and I guess you never forget your first love, well, NY was my ... END_OF_DOCUMENT_TOKEN_TO_BE_REPLACED